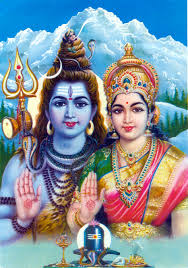 Amongst the attributes of the Chakras we meet two important symbols: Shiva and Shakti.
SHIVA symbolises consciousness, the masculine principle.
SHAKTI symbolises the feminine principle, the activating power and energy.
Whenever a power becomes active, and wherever energy exists, Shakti is working. Other terms for these primal principles are PURUSHA and PRAKRITI; Purusha is consciousness and Prakriti is nature.
Lord Shiva is generally portrayed holding a trident, which represents the trinity of Īshwara, Purusha and Prakriti .
Īshwara is the omnipresent, eternal, formless divine principle; Purusha is the Ātmā and Prakriti is the manifestation, nature. An electric light can be used to explain their relationship. The electric current, which is the source of the light, is Īshwara; the light is Purusha, and the object that is illuminated is Prakriti.
SHAKTI (or Prakriti) means energy, power, movement, change, nature. It is the maternal principle – the provider, abundance. In the human as well as in the animal kingdom the mother offers nourishment, warmth and security. There is no greater love than the love of a mother. The mother carries and nourishes the child in her own body. When it is born she provides it with mother’s milk and raises it at the sacrifice of her own self until it becomes self-reliant.
SHIVA (or Purusha), on the other hand, is pure consciousness – the unchanging, unlimited and unswayable observer. Purusha has no desires whatsoever; these are inherent only in Prakriti. Purusha is the empty, clear screen onto which Prakriti projects her colourful film.
Shiva and Shakti are manifestations of the all-in-one divine consciousness - different sides of the same coin. In many pictures these two primal powers are each depicted as being one half of the same image; one side female and one side male. The left side is the Divine Mother, Pārvatī, the “feminine” energy, and the right side represents Shiva, the “masculine” consciousness.

Posted by BLESSYOURHEARTS at 6:31 AM