A STRONG CASE FOR NON-VIOLENT RESISTANCE 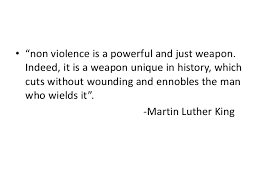 Carrie Nelson-hanks Much respect to Dr Martin Luther King. But, I am a Malcolm follower. Today people. It's your people wreaking havoc. My people silent. Very sad. Speak up grandma. Winter sleep at your house, spring kill his people. You know that's right sisters.
1
Manage

Ron Alexander Dr. King was instigator of Civil Rights. What did Malcolm do for you?
1
Manage
L

Carrie Nelson-hanks Ron Alexander he taught me that passive resistance for the black man was playing into the hands of the masochist who brought us to this place. Look at the black man still suffering the legacy of a nation of people who people of all nationalities resist…See More
1
Manage

Ron Alexander Please keep in mind, that this is group is based on NON-VIOLENT PRINCIPLES. If we went to Washington to block the parade with weapons, we would be abolished with no sympathy from most ot public.Manage

Carrie Nelson-hanks Ron Alexander my weapon has always has been my mind. My thoughts and prayers are a constant for those I love. The World I save will be my own and it spreads from there. Again, "war", what is it good far. Don't own a weapon, despise guns. Two children w…See More
1
Manage

Carrie Nelson-hanks Ron Alexander yes he did. So What? An eye for an eye is biblical isn't it. Or should I remain passive while my family is slaughtered. I will die once and be judged once. Not by man, but by that promise that was given me to believe. ASE!!!
1
Manage
Sad
Like
Love
Haha
Wow
Sad
Ang

Ron Alexander Carrie Nelson-hanks THIS IS A NON-VIOLENT RESISTANCE group! Violence does not create permanent change. I don't go for Old Testament Biblical hatred. I am a Jesus follower, who is all about love. LOVE YOUR NEIGHBOR AS YOUR SELF. LOVE YOUR ENEMIES...Manage

Posted by BLESSYOURHEARTS at 11:33 AM