A Note to Racial Justice Group at Indigo Sangha

Dear Ones, I am pleased that Jackie and Nancy are joining me at the Battery Sunday AM at 8:30 for BLM support. I had a long informative talk with Rev. Dixon yesterday. He informed me that no permits are needed for groups less than 50. Also, he told me his group was upset that the Confederates were "grandfathered" in for permission to rally at the Confederate Monument by a sympathetic Police Officer. He said most of the police are pro-confederate. Later in the day, a Confederate bumped at BLM member and almost knocked her over. She was filming. BLM group leaders insisted he be arrested. He was and found to be a sex offender, who had not registered in six years. BLM was upset that he was released on small $1,000 bail. He also informed me that NAACP was not accepted by Black Activists as an effective org. "Stand as One" was the principle group there along with his The Coalition. He insists members there do not engage physically with the Confederates. He said the BLM group have a lots of young angry members, and most do not come on Sunday. One was so angry last Sunday, that he would not be one of the occupiers of the Monument area. He went across the street on his own. I asked him about "Civil Disobedience" ("good trouble" as John Lewis described it.) In other words, refuse to go across the street?  Rev. Dixon told me that it has not been decided for this Sunday. They have to get there very early to occupy the Monument area, as they did last week.

Cookie Washington, a well-known Black leader is speaking at Unity Sunday on FB, we will be leaving at 10AM in order to listen to her at 10:30. She always has wise words on race relations.I highly recommend our whole Sangha be informed to listen to her as part of our BLM support mission.
The Navy Vet  in photo went to Portland BLM protest to remind these unmarked militia of their oath to the Constitution, and they beat on him with batons, and when he did not flinch, they sprayed him in face with pepper spray. He calmly turned around, raised his arms and walked away. Although, later at E.R. he had a badly broken hand. To me he is a fine example of non-violent resistance. He received violence without returning it. He is a fine example of a Veteran For Peace. 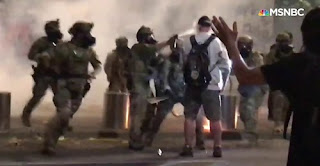 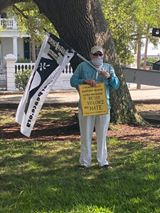 Posted by BLESSYOURHEARTS at 1:03 PM