A way I celebrated Biden's victory

ONE WAY I CELEBRATED BIDEN/HARRIS VICTORY😍Great way to celebrate Biden/Harris victory. On my mindful walk around the Confederate Monument. I received cheers from BLM counter protestors across the street. The BLM gal who took this video courageously walked with me around a couple of times with big BLM flag which really upset the rebels. They had the police stop us to try to convince us to move to other side of street, although they admitted that they has seen me walking for months/ . MIchelle finally agreed graciously, after loudly telling off the cops, (uh oh!), to move over, if I got to stay. The police Officer went over to ask complaining Con. if that would be agreeable. This is same rebel who gave me a hard time several times. However, he told the cop that it would be alright, as "he has never caused us any trouble." HURRAH FOR NOBLE SILENCE. As there is a lot of times I wanted to give him a piece of my mind, I just gave him a peace sign, or a sign to keep his mask on, as the police had warned him before to not yell at me with mask off. ALL IS IS WELL THAT ENDS WEL 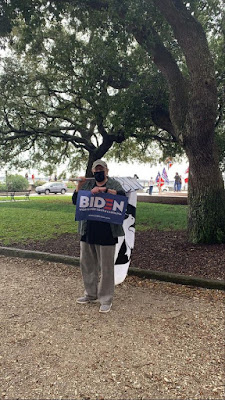 Flag and signs I took to Monument 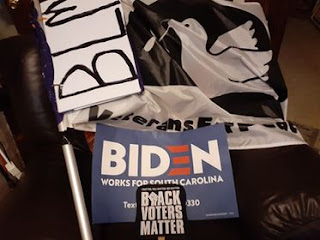 I admire your courage; wearing a Biden sign, however, would not be my choice. As the saying goes, “A good loser says little;
a good winner says nothing at all”.It is time to bring down the Confederate statues and flags, but not to rub it in; we must be good winners. I know that when I would see a Trump bumper sticker or such after he won, I would become enraged. This only serves to widen the divide. We must try to speak to our opponents and try to bring on reconciliation and find common ground, while stressing that we are all Americans and that we all want the same thing, we just disagree on how to attain our goals. Be safe out there. You may get a vaccine in a few months. God bless you

Good point, however I carried the sign primarily for BLM friends who were all in celebration mode as myself, as if not for People of Color Biden would not have won...fair?  Ron

When the cops stopped us, I volunteered to put sign back in the car, however they said that was not bothering the Confederates, but the big BLM flag carried by my friend.
Being forced off the public sidewalk to other side of street is like being forced to going to back of bus. I am glad they did not force me, because the Confederates said "I was not causing any trouble."
Michelle Melton
I had every intention to walk in silence and peace. And no intentions of them taking away Your path. Sometimes our plans are sidelined for a greater good! I got to tell the CPD just what I thought along with the racist confederates on the monument.