My Sunset Sanctuary for Peace and Beauty - the expanded story!

Losing oneself in Nature - From Youth to Elder

As a child, my family spent a week every summer at the beach. Driving there, one could see the glimmering ocean from a mile away. I would get very excited for there I felt free. Away from a workaholic Dad;s abuse and a burdened Mom's  depression, which was relieved. I would look over the bent (even then it was obvious to me that the Earth was not flat) shining horizon and wonder in awe what was on the other side. We would play all day and late in the evening playing on the beach in gleeful joy.
My next feeling of elated freedom was as a teenager recently graduated from a restrictive high school, I was hitchhiking out of town destination unknown away from dysfunctional family.
While in college, I would go down to mountain creek in the valley and read nature and romantic poets like Whitman, Byron, Keats, Coleridge, etc.
As a young adult, Nixon was president, and was elected promising "peace" in Vietnam, and my Brother was over there flying helicopters, and I was not there because of him. He wrote me letter while I was in Officer Training, not to come there. He admired the Vietnamese people, and did not believe we should be there either. Two Brothers were not allowed there at same time anyway. In addition, I saw a documentary and read many articles saying we made a mistake being in Vietnam. So I dropped out of OCS, and was sent to Alaska instead. Going from Ft. Benning, Georgia to Fairbanks, Alaska in December was not a picnic. It was the coldest month in the history of that state at the time averaging -44 and below 60 several times. We had to play War Games, leaving many with frostbite.
To make the story shorter, I was thankfully transferred to the Medical Corps and was sent to much warmer Anchorage to run a lab. for the Army. That was like a relative paradise, and was more like a real job getting the weekends off. Which I used to hike and climb mountains. We did not carry guns, which is an anathema in Alaska, and the animals appeared to see us as no danger. Therefore the scattered Homesteaders welcomed us as many of them had befriended local wildlife in their acreage, hunting miles away. Mountain goats, Moose, Ptarmagans (birds much like chickens), and even a Grizzly with cubs did not shy away from us. Although we kept our respectful distance. I fell in love with Alaska, however when receiving an early out to go to Graduate school, I gratefully accepted it.
Making a long story short, I ended up in Florida working as a Clinical Pathologist (A.S.C.P. not M.D.) and continued my love affair with the Ocean and a girlfriend who wanted to sail away with me. We lucked out finding a very seaworthy sailboat in Miami, and a long cruise in the Bahamas. I love the islands and exploring them on land and under water, where I could lose myself in the colorful Coral Reefs. Splendid Bali was overall my favorite island a few years after this Bahama cruise.This was an escape I needed, as I was really mad the Nixon kept the war going years after his second election. My dear Brother, the day after his 22nd bday was blown away with only 2 weeks left in combat. He was attempting a rescue and landed on top of some Viet Cong tunnels, which they poured out of and killed everyone on board except Barry's co-pilot who barely survived and lived to tell the story on National T.V. (another long story).
When I returned from that cruise, I read a newspaper for the first time in a long time, and saw the headline that said "President Ford", I was dumbfounded and relieved. I had gratefully missed the whole Watergate drama.
This time with President trump, again I wanted to escape, however I decided to stay and be an activist to help rid ourselves of this treacherous man. I was over 70, had nothing to lose and nothing to prove. So, instead of a full retreat, I have these several times a week escape to the Folly River Inlet a long walk from Folly Beach County Park for mostly solitude too.
Fortunately, only a few miles, from where I live, there is a River Inlet at a beach, where I love to escape several times a week. For me, nature provides a unique opportunity to reconnect with the stillness inside, which is the source of our deepest wisdom,  Not just for the beauty, peace and solitude, there is an aliveness at a place where salt water intermingles with fresh water, there is more fish, more birds where the mix makes it a favorite feeding place. A large benefit is that the wind blowing off the ocean at that River is of the purest on the planet. There is no island between this Inlet and the Straits of Gibralter on the other side of Atlantic Ocean.  Especially with the mighty Gulfstream sweeping by not far off shore and the Sargasso Sea further out creating gigantic air purifiers.
I am reminded how vital it is to maintain our connection to nature, wherever we call home. When I  lived in California, I felt this connection through the towering redwoods, the rocky Pacific coast and the majestic beauty of Yosemite and Mount Shasta.  In nature’s presence, I  can feel a profound sense of awe, which has been defined as a mix of reverence, fear and wonder. Photographer Nicholas Hlobeczy summed it up nicely when he said “Without awe, we cannot truly be alive."
Last evening at the Folly River, July 26th, 2021 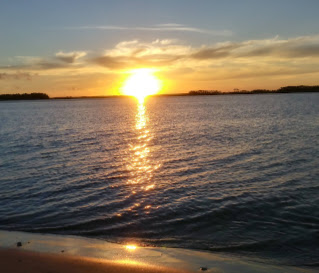 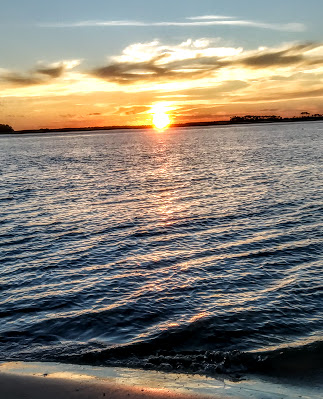 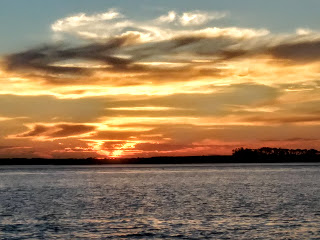 I’ve edited part of your writing. You might not like what I’ve done so feel free to ignore it. What you said was good, I just tried to make it flow a little more. Here goes: I started with line 3. Lines 1 and 2 are perfect. I would get very excited for I felt free there. It was a relief to be away from a workaholic Dad’s abuse and an over-burdened Mom’s depression. I would look over the bent shining horizon in awe and wonder what was on the other side. Even at that young age it was obvious to me that the Earth was not flat. We (Ron, you need to say who “we” is). Would play on the beach all day and into the evening filled with joy. Not until I was a recently graduated teenager, hitchhiking out of town from all of the unhappiness, did I have another such feeling of elated freedom. Destination? Unknown!
I’m wondering if you should maybe make this two separate writings which you could expand. One about your wonderful love of Mother Nature. And one about war and your brother and all the nasty politics
What do you think?
I’m addition... is a fine paragraph but maybe you should end it with ...real job. I used my weekends off to hike the nearby mountains. I did not... good Homesteaders...good but add they did their hunting miles away. Obviously, I fell in love with the beauty of Alaska.
Posted by BLESSYOURHEARTS at 9:27 AM