Kudos for Veteran for Peace work.


Hi Ron, I just want to thank you for all you do for peace in the world. Also to let you know that you are anything but a coward. You made good judgement in leaving the situation. I am proud of you for using your good judgement. It takes courage to do the right thing. Especially when others are not.
Thanks dear Jinaki, it was either that or go across the street, which I cannot do with my skin condition, and I was pretty burned out anyway after 2 hours. However, I do compare it to being told to "go to the back of the bus." If the BLM group did ask for permit first, which I have to believe, was it time for "Civil Obedience"? I do not believe in mob action though, and I think the Confederates were in mob mentality, and proud that BLM group did not get there. Rev. Dixon, who had to leave early to go preach, gives instructions "not to engage", which I admire.                                                                   NOWmaste' peace, and joy, Ron 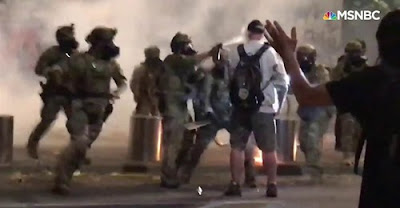 The Navy Vet there in photo went to Portland BLM protest to remind these unmarked militia of their oath, and they beat on him with batons, and when he did not flinch, they sprayed him in face with pepper spray. He calmly turned around, raised his arms and walked away. Although, later at E.R. he had a badly broken hand. To me he is a fine example of non-violent resistance. He received violence without returning it

Feedback after the Black Lives Matter/Confederate ConfrontationYou're a courageous mindful advocate in training--like me, like all of us.

The "edge" of compassionate direct action takes a lot of concentration and skill to navigate. It's especially hard alone in a crowd. This is why Thay insists monastics travel with a "second monastic body." It's why his retreats have up to 75 monastics leading them (their combined energy creates the "container" for practice).
Mindful advocates hold questions re our skillfulness, our peace and our effectiveness in our hearts like a koan. The questions keep us humble and not knowing, free from ideologies or being swept into the moment. The questions keep us calm and clear.
And, like you, I know it's important we not wait until we're "perfect" or nothing will ever get done!
I have great confidence in your mindfulness and inner knowing, Ron.
No judgment, no regrets.
Much love and respect,
Heather