As a Veteran for Peace, I am an Instrument of Peace: 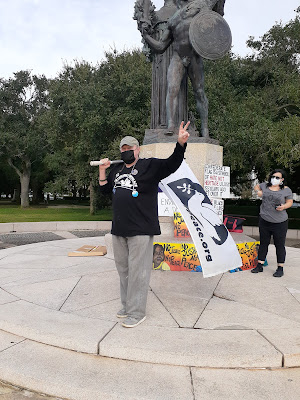 Peaceful day at the Confederate Monument: 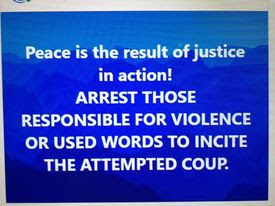 Dear Sangha Members, since I told you about Marlena's arrest, I am sending you this excellent letter to the City Council, etc. Marlena is very traumatized, and as a leader there at the monument, she uses a peace sign instead of a raised fist. This may sound arrogant, however, I think if I had been there, the violence may not have happened. Anyway, as I said, i think without mindfulness there is no true peace? I am very grateful for the teachings on mindfulness the last 2 weeks at Sangha. Our BLM group is raising money to pay her bond, and for a lawyer (know a good one?). Also, 2 Unity members of our Sangha contributed to the defense fund. I do feel as a Veteran for Peace, I am a instrument for peace.    Peacefully yours, Ron
This has turned out to be "good trouble", as like I said it is bringing a lot of attention to the matter. This Sunday, they sent 2 young Black officers, who
were much more rational at the situation, hence no violence. Erin who wrote the letter is also a veteran, and usually carries an American Flag.               AS A VETERAN FOR PEACE, I AM AN INSTRUMENT FOR PEACE
On July 11, 2021 I was participating in a peaceful demonstration against the white supremacist hate-group known as “Flags Across the South”. This group receives weekly permits from City Council, despite violent threats they post online and virulently racist commentary regularly posted on their Facebook page. Instead of grasping the violent nature of huge Confederate flags waving in a location where African Americans have been terrorized since Charleston’s founding, the CPD operates as if the Flaggers are benign and unthreatening and “just exercising free speech”. In truth, they are purposely fomenting hatred and trying to reassert white dominance with their symbology.
On July 11, a group of pedestrians walking past the “Confederate defenders” statue decided to heckle my friend Marlena Davis, screaming obscenities and goading her to cross the street and “make me” when told to shut up. Marlena did cross the street towards the heckler, and Captain Weiss stepped in front of her and blocked her path repeatedly. He did not say or do anything to the woman screaming at Marlena. The woman’s friends were having to physically hold her back. Ignoring the white woman being violent, Captain Weiss zoned in on Marlena and decided to put his hands on her, and put her in handcuffs, which made the situation infinitely worse and led to mass confusion amongst our group. The result can be seen on several videos that have already been posted online.
Captain Weiss does not know the meaning of the word “descalate”, nor does he seem to care. His actions on July 11, 2021 at White Point Garden need to be fully and independently investigated, rather than taking his word or the word of other officers who he outranks and intimidates. Captain Weiss arrested Marlena Davis for a  ticketable offense, and got unnecessarily physical with a 70-year-old man who was upset at seeing his friend put in handcuffs for no good reason. Rather than any attempt to calm our group and have a reasonable discussion with Marlena (who lost friends in the shooting at Mother Emmanuel church) Officer Weiss insisted on her arrest and refused to tell any of us what crime she had committed, despite repeated requests. He also grabbed Jerome’s arm (70 year old man I mentioned) and violently twisted it backwards, directing other Officers to “get him”.
In my view, Captain Weiss violated Marlena Davis’ 4th amendment protections, and seemed to specifically target the African American members of our group despite many of us being in the same vicinity. His actions were not necessary or justified. He was angry, uncommunicative, and seemingly incapable of basic people skills. This is not the first instance of CPD operating in a manner of impunity and I am repeatedly shocked at their very obvious bias on a weekly basis. Internal affairs needs to take these events seriously before someone gets killed.
I do not pretend that police officers have an easy job. But they made a choice to put on a uniform, and take an oath, and if they cannot learn how to properly operate in the community, then they should stop accepting taxpayer dollars and find a new profession.
If the City Council cares about public safety or any meaningful racial conciliation, then they cannot remain silent about CPD’s bias nor about weekly gatherings of white supremacists downtown. Enough is enough.
Sincerely,
Erin Leach-Ogden
Resident of District 5
<marlena at monument.jpg>Marlena Davis Marlena at Monument
Posted by BLESSYOURHEARTS at 9:43 AM